Part 1 of this blog followed the fortunes of Frances Southby’s elder daughter Frances, the only child of her first husband James Berriman, who married Sir Thomas Rumbold, the notoriously corrupt Governor of Madras.

Mrs Southby went on to have three children by her second husband, William Southby, and on 16th July 1758 the eldest of these, Elizabeth, was married in Bombay at the age of sixteen to Richard Maitland, a 55-year-old artillery officer. This extraordinarily unequal match did not last long, since he died five years later on 21st February 1763, and on 20th April 1765 in Calcutta she was married for a second time to Francis Charlton. The Charlton family was long-established in Ludlow in Shropshire, and there were Charlton baronets, but Francis was probably a younger son, since he went out to try his luck in India. His sister Isabella also went to India, and married George Dawson (1732-1812), the Governor of Masulipatnam. Francis rose to become a member of the East India Company’s Council in Bengal, and in 1768 was a member of the Parliamentary Committee that was appointed to investigate the Company’s conduct. In 1766 Elizabeth Charlton gave birth to a daughter, but tragically she died in childbirth. It was this orphaned child (confusingly also named Elizabeth Charlton) who would become the wife of Matthew Montagu. 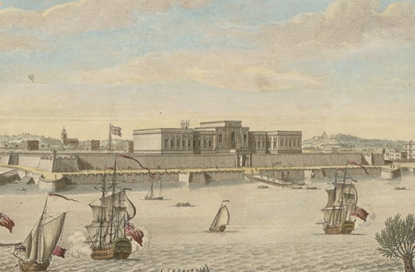 Whilst he did not rise to the wealth of nabobs like Thomas Rumbold, Francis Charlton came home with the tidy sum of £50,000 (equivalent to £9 million today), and lived out his days in Lymington on the Hampshire coast. In his will he left £1,000 to Frances Southby, the ‘mother of my late dear wife’ and the bulk of his fortune to his daughter Elizabeth, who at the time of his death was aged sixteen. Since she was under-age and a substantial heiress it was considered that she needed protection, so she was made a ward of Court under the trusteeship of her father’s friends Ralph Leycester and Thomas Raikes. These were influential men: Raikes became Governor of the Bank of England and was the brother of Richard Raikes, founder of the Sunday School movement. Leycester was an MP and both men were active supporters of William Wilberforce in the movement to abolish the slave trade.

Mrs Southby set up house in London with her only surviving child Catherine Southby and granddaughter Elizabeth Charlton. They lived in Marylebone, and were near neighbours to Elizabeth Montagu in Portman Square: she may have heard through local gossip of the teenage heiress. Mrs Montagu had in 1781 made a substantial property acquisition, spending £36,000 on a coal-bearing estate at West Kenton, adjacent to her existing coal mines at Denton near Newcastle. She financed this purchase through two mortgages, and Elizabeth Charlton’s £50,000 fortune had clear attractions.

The negotiations led to a marriage settlement whereby the mortgages were paid off and Mrs Montagu settled Kenton on the happy couple, together with her estates at Allerthorpe and Eryholme in North Yorkshire, and her new house in Portman Square. Matthew Montagu paid his grandmother-in-law a generous annuity of £300 (equivalent to over £50,000 today) for the rest of her life: he may not have expected that she would live for a further twenty-three years, to the age of ninety-three.

Frances Southby’s sister Elizabeth Prince, who had accompanied her to India when they were both teenagers, died in 1796. Her second husband was dead and she had no children, but she was attended in her last illness by her sister and her niece Catherine, as well as by Matthew’s wife Elizabeth, who took down at the dying woman’s dictation a codicil to her will. She left legacies to Catherine Southby and Elizabeth Griffiths, as well as to Philippa Aspinwall and Margaret Backwell, daughters of her brother Stanhope.

By the end of her life, Frances Southby had outlived not only her contemporaries but much of the next generation, including her daughter Catherine, who died in 1805. In her will she bequeathed £5,000 to the six children of her grandson Sir George Berriman Rumbold, and smaller amounts to the surviving daughters and granddaughters of her brother Stanhope. A further £4,000 went to Matthew Montagu, and appears in his ledger at Hoare’s bank.

The Rumbold daughters were to marry respectively a British admiral, a French colonel and a wealthy Prussian banker. Their brothers William and George went to India and became partners in the banking firm of Palmer & Company in Hyderabad, which went bankrupt in 1830. Julian Cotton wrote that ‘The Rumbolds furnish an apt illustration of Kipling’s saying that certain families find their way to India generation after generation, as dolphins follow in line across the open sea’ – but with the death of William in 1833 ‘the link was snapped’[1].

Mrs Southby lived for nearly a century. She spent her youth in India, lost two husbands and bore four children, saw one daughter marry a man who became a hate figure in English society and another die in childbirth. She outlived all of her children. She died at the beginning of April 1808 and was buried at St Mary’s Ealing, alongside her sister and her daughter.